Finnish Cultural Connections, Collections, and Reflections
Cultural Collections Project 1: Finnish Themes (Google Maps)
Cultural Collections Project 2: Tour Guide (History Pin)​​r
Cultural Reflections Project 1: Where I'm From Poem (Prezi)
Cultural Reflections Project 2: The Last Word on Finnish Lessons 2.0
The Finnish educational system is one to admire.  The philosophy behind valuing teachers and allowing students to spend more time learning and less time testing is one that should be modeled throughout the world.  The requirement of a Master's degree coupled with the high number of yearly applicants to teacher education programs lead to teachers being seen in the same light as doctors in Finland.  When teachers are given autonomy and are not required to prepare students for state-mandated tests, students are able to have authentic learning experiences.  One of the biggest differences between Finland and America is the use of testing.  We as an American society seem to think that we can determine the effectiveness of teachers through state-mandated tests, which don't even evaluate the true skills a student needs to be successful.  Our kids are tested to death, while students in Finland are taught how to be happy.  In order to improve the educational system in the United States, we need to teach and evaluate students on the skills they need to be successful in the 21st century.   My final takeaway was that I hope Finland will continue to improve their educational system, especially now that immigration has increased; it's important to make continued improvement.
Cultural Reflections Project 3: Travel Writing (Blog)
Who am I?

Vibrant colors flashed before my eyes as I spiraled out of control.  The blues and reds had a contrasting effect of calm and blood.  The greens had a sickening effect.  The whites were blinding as I tumbled towards uncertainty.

It all began on our Friday morning trip to Tallinn, Estonia.  We all boarded the Superstar ferry that was set to depart at 7:30 from Helsinki.  The name Superstar makes me think of myself.  I am resilient and can be quite impressive.  As we settled into our seats down near the stage of my namesake and the boat retreated from Helsinki, the waters of the Gulf of Finland had a settling effect. Cards were being played and laughs could be heard from my compatriots.  Eventually the aurora notification sounded on a nearby phone and we were informed that we had entered “Estonian Waters.” The water was no longer settling.  The rough waves clashed with my churning stomach.  To me, the silver lining though, was my ability to find protection nestled safely in my resting spot.

We had heard about a graffiti place (1) that could be interesting and when we saw graffiti covering the walls on top of a platform behind a large set of stairs, we decided to investigate.  The structure looked like something out of the Cold War.  Standing at the bottom of the stairs, I imagined being Estonian and being forced to listen to speeches by our Soviet oppressors.  Graffiti covered walls, abandoned buildings, and disintegrating infrastructure mixed with the overcast day was slightly intimidating.

We ascended the stairs towards the top of the platform where we were able to see views of the Baltic Sea as well as the city from the other direction.  The graffiti was so unique and almost picturesque that I wanted to get a closer look.  I leaned over the side to get a better look and all of a sudden I lost my balance.  Vibrant colors flashed before my eyes as I spiraled out of control.  The blues and reds had a contrasting effect of calm and blood.  The greens had a sickening effect.  The whites were blinding as I tumbled towards uncertainty.  My insides crashed and went topsy turvy.  I was bruised, scratched, and embarrassed.  I survived, but found myself stuck in an embankment.

I asked myself how I would be able to get out of the structure?  Walls surrounded me on three sides and a larger drop on my final side.  I contemplated jumping down to the next level as I saw an easy escape route from that platform.  As I sat on the edge, preparing for another fall, I couldn’t muster up the courage.  This drop must have been close to 15 feet and I was still shaken up from the 10-foot disaster.  I walked to the opposite wall and saw that I could possibly use the rubble from the crumbling foundation as a support.  I climbed and climbed and was able to make it to a safe spot where I eventually rejoined my crew.

You would think that at this point I would be coddled and cared for after my troubling experience, but no! I was stuffed inside a backpack, smashed between a peanut butter and jelly sandwich and a pair of socks.  Then to top it off, the group went to eat at Pegasus (2) and I wasn’t even thought of, which really irritated me as I am an integral part of lunch.  Instead of even considering me, I heard the group in pure bliss as they ate their bread topped with pear, hemp seed, and pumpkin seed and were nourished by unique drinks such as cucumber water, glog, and kuldne eil beer.  My envy made me boil with resentment as I longed for revenge.

After lunch, the group went on the walking tour of Tallinn (3) and I still wasn’t released from imprisonment.  Through my muffled surroundings, I heard the energetic tour guide introduce herself as Katrina.  The walking tour began in Harju Park, which Katrina told the group was built after the bombings of the Soviet Union.  As the group continued walking towards the Estonian Independence Monument and the Kiek in de Kok (Look into the Kitchen) tower, I grew more and more flustered as the temperature increased and I felt sweat trying to escape my silver lining.  I knew, however, that I would be released soon enough as my owner would require my services.

Finally, as we sat across from a park where the Baltic Chain ran through Tallinn, I was extracted from my cramped quarters and used for what I do best.  I offered my now-room-temperature water to my owner and was once again rewarded for my services.  During the rest of the afternoon in Tallinn, I was back in my resting spot, right on the outside pocket of my owner’s backpack.  I saw views of Tallinn from Patkuli Vaateplats and even took a few pictures with a ghost monk in Old Town.  It was a day that I don’t think I will forget.

1 - Linnahall was built in 1980 to be used as a sports venue for a sailing event during the Moscow Olympics.  Linnahall was also used as a heliport and a place for docking ferries.
2 - Pegasus Restaurant has a literary pedigree, where writers often ate and still do today.  Pegasus has books around each table and gives you a check inside a book.  Excellent food and service as well!
3 - Free walking tour of Tallinn is two hours and gives an extensive history of the city; an excellent way to engage with this unique city.

Cultural Reflections Project 4: Finnish Book Club (GoodReads)
This was an interesting story to read as far as picking up on some of the important cultural aspects of Finland.  The novel raised some questions about the protagonist as she struggled to find an appropriate balance between being the lead investigator in a murder case versus being a friend with some of the suspects.  I listened to the audio of the novel and the narrator was not as engaging as she could have been.  The plot overall was decent, but I still questioned how she was allowed to be on this case when she had a personal relationship with some of the characters involved.
Cultural Reflections Project 5: Bio Poem on Self and Famous Finn (Fotobabble)
Cultural Reflections Project 6: Immersive Narratives (Bubbli)
NC State (2-scene):
Helsinki (4-scene): 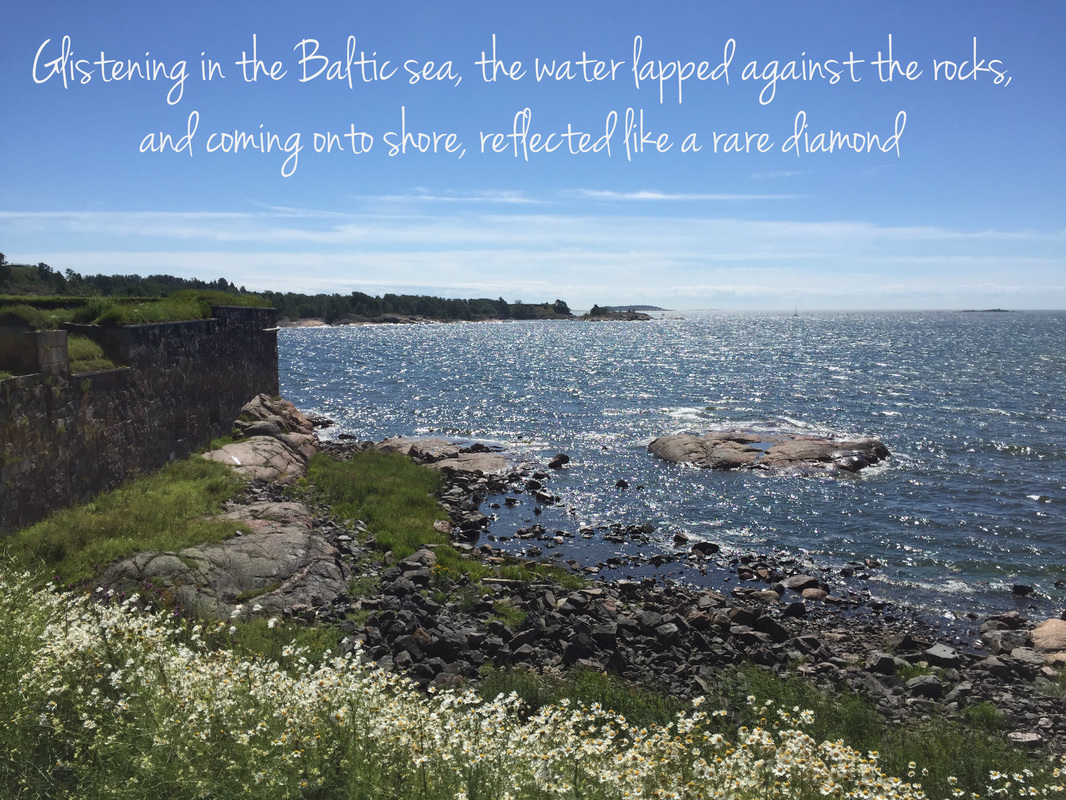