​Driving into Hanko, or Hango as the Finnish say, the view of the highway slowly transformed itself into one of wooded forest, and from the lush green trees of Nordic summer, beautiful views of blue water, bright bikinis, and slightly tanned bodies on sandy beaches began to emerge like something straight out of a Monet painting. Who knew that there was a place warm enough in Finland to remove your scarf and socks to sunbathe and take a cool dip in the water? The days leading up to this point in our travels so far have been lovely, but chilly enough for a light scarf and windbreaker, so what a relief it was to feel the sun shining warmly when I stepped down from the luxury of the sleek black Kovanen bus with the faulty wifi.

I knew there was short time to be spent in Hanko, so as we made our way there from Ekenas, I studied the “pack o’maps” (as our group leader likes to call them) to determine what would be my best plan of attack for navigating this quaint harbor town. I decided the must-sees for the ensuing hour and forty-five minutes were the emigrant statue, the two beaches, the street full of classic villas, and the casino. The must-dos included purchasing an ice cream and people watching along the shore, taking some photographs along Appelgrenintie, and checking the temperature of the water. Whether I would take a dip or not, well, that was to be determined upon analysis.

When I disembarked from the bus, I followed a group member to the tourist information building where a friendly blonde Finn inside sketched out a map of her recommendations for a stop in Hanko. It was immediately clear from all of the glossy beach magazines inside, that this seaside town is a popular tourist destination for Finns from all over Finland to go on their holidays and in the summers. I learned of the view from the water tower that could not be missed, and I learned of a set of cliffs where emigrants, planning to journey to North America, used to host dances. I promptly added these two stops to my mental itinerary and set out into the bustling streets.

The Hanko skyline consists of a unique red water tower, about 50 meters high, and the area church; there were no other looming buildings or structures in the area. Naturally, I went in the direction of these buildings first, weaving my way through the purple and pink flowers that embellished the city park near the tourist office. The water tower is an interesting burnt red color, with an even more interesting architectural style, and you can pay 2 euros to take an elevator to the top to view the entire city from above. I lingered outside the tower, waiting on the lift that held only six passengers at a time; the stairs were not an option for visitors, apparently. The cramped close quarters of the elevator make for a good minute and fifteen second opportunity to practice your Finnish, or Swedish, the second most common language spoken in Hanko.

​The 360 views from the top of the tower were stunning, like looking down on a model town displayed in a museum. I took my panorama photo, my Bubbli, and a quick snapshot of each side for the memories and headed back down to the bay to scope out the sunbathing situation.

​The rocks lining the bay seemed perfect for exploring and climbing, so I stumbled over and along the rocks for a bit until I encountered a cranny that smelled distinctly of urine, and I decided to head back the way I came to enjoy the view in an atmosphere with a more pleasant aroma. Back at the shore, I dipped my feet in the icy water, but this only lasted a minute before I could no longer feel my toes. I sat on the rocks, enjoyed some freshly picked berries from earlier in the day and observed other brave souls attempting to submerge their bodies in the frigid waters. I think the record was no more than 5 minutes before they ran out, teeth chattering and hands clasped together around the dripping bodies now covered in goose bumps.

When I could no longer stand to watch this self-inflicted torture, I decided to set out to find the emigrant statue. However, the most important matter at this point, was to first go for an ice cream. The one near the center of town had a long line, so I strolled to another park that was less crowded, found that beautiful stall containing the sweet creamy goodness, and attempted to order in Finnish – pieni pallo kookos; 1 scoop of coconut, and of course, “kiitos.” Clearly, I’ve been to a lot of ice cream stands in Finland.

I soon encountered the emigrant statue walking back in the opposite direction. To my slight dismay, the statue did not have a plaque of information going into detail about its significance. It had three seagulls carved into the top flying towards the ocean, and the names of the Finnish towns who lost residents during the migration carved into the granite. It was simple, yet present.

I continued making my way back in the opposite direction to take some photos of the pastel villas along the bay front, encountering other members of our motley crew of teachers along the way. The walk along Appelgrenintie with these villas looked like a street full of vintage dollhouses.

Soon, I came across the other, larger beach with a few nude sunbathers, and a decorated pole left over from the summer solstice festivities adorned in dried flowers and sailboats spinning at the top. Here, I took a moment to rest, stick my toes in the rocky sand where the water sloshed to the shore, and enjoy the warmth of the sunshine and the company of my peers who were doing the same.

Time to retreat back to the tourist machine with the fancy seats soon approached (I swear time moves quicker in Finland!) and it was determined that a stop for ice cream was to be made before boarding the bus. I could not turn a second cone down and opted for the vanilla soft serve. I was not quite adventurous enough to try the salmiakki (salty licorice) flavor, but I’ve heard it’s a local favorite. 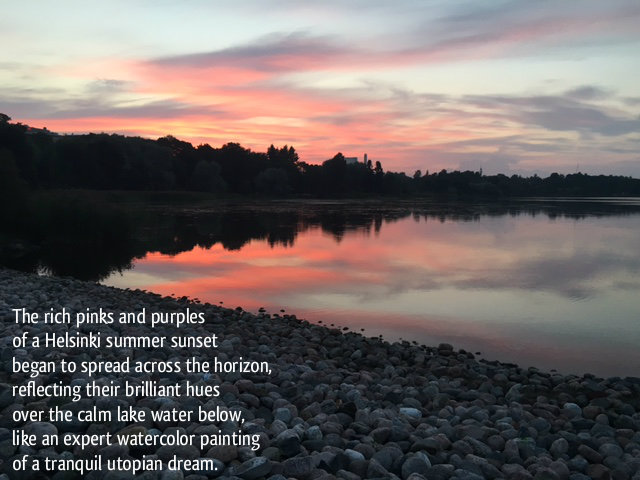