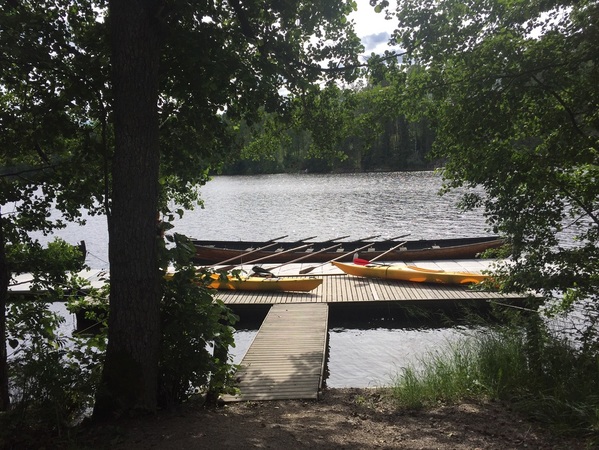 After a sunny day well spent in the pristine peace of Nuuksio National Park in Haltia, Finland, we happily strolled down to the shores of Lake Pitkajarvi. As our troupe of traveling teachers was divided amongst 2 boats, I eyed my boat mates and my guide. Was it just my imagination, or did a dark cloud just roll in?

With the collective rhythm of a wet mop, my boat struggled to leave the dock, let alone cover any distance in Pitkajarvi's hefty headwinds. Boat 2 whizzed past us with seemingly effortless strokes. We attempted to look alive as we felt their stares, but no matter how hard we tried, our syncopated oar swings merely slapped the water. Wood was clashing and somehow bodies were tumbling backwards off their benches. We hoisted one another up by the straps of our life jackets—which I worried might need to be put to actual use at some point. The further back one sat in the boat, the higher awareness she had of the crew’s abilities. Our guide was slacking on the job, so our ever-optimistic music teacher, Ronda, attempted to bring us some harmony from the final row of the floundering vessel:
​
My paddle’s keen bright
Flashing with Silver
Follow the wild goose flight
Dip, dip, and swing
Dip, dip, and swing

But we didn’t quite dip and we surely didn’t swing. She tried to adapt to our instructional singing level with a special rendition of Row, Row, Row Your Boat, but we completely butchered that, too. We were eventually able to axe our way back to the dock with windblown hair and blistered hands at least 30 minutes behind Boat 2. Nonetheless (now that we've had some time to recover), we can say we were all thankful for this day on the water with new friends. And appropriately, Ronda’s inclination to incantation perfectly echoes the roots of Finnish creation myth, the Haltia Nature Center, and Finnish culture of today.

Prior to rowing the 7 traumatic km on the lake, we were sweetly nestled right up the hill in a wooden egg located in the center’s main exhibition hall. Our tour guide, Satu, explained the inspiration for the building's architecture. She had all the Tolkien nerds in the house at “Kalevala,” the national epic compiled by Elias Lönnrot from Finnish oral folklore and mythology. The main character in its creation story, Vainamoinen, is the first and wisest man. He brings order to chaos with magical songs, chants, and poetry. He was the inspiration for Tom Bombadil, the merry old fellow from The Lord of the Rings who relied on the power of nature and song. He used his magical voice to charm birds and otters into guiding his boat to the shore for him. We could have only been so lucky.

According to the Kalevala, in the beginning there was only air and water. The goddess Ilmatar floated in these primal waters for over 700 years. A duck made its nest on Ilmatar’s knee and laid six golden eggs and one iron egg. The hatching of the eggs made Ilmatar’s knee too hot, so she moved it, making the eggs roll down into the water and break. The pieces formed the earth, the sky, sun, moon, stars and clouds. Then Ilmatar then gave birth to Vainamoinen. He brought trees and life to a barren world with the help of seeds from Ursa Major.

And so the Haltia building rests on the slope of lake Pitkajarvi like a duck in its nest. The tower reaches into the sky like a bird’s neck, with the head turned to look toward the water. The solar panels on the roof resemble a bird's feathers. And just as Vainamoinen's footprints created the lakes of the Earth (over 180,000 in Finland alone), the Haltia Nature Center created a special footprint of its own. The architects treaded softly and sustainably, using only wood in its construction, natural lighting, and geothermal, wind, and solar energy.  Haltia won the 2015 European Museum of the Year Award with special commendation as an exemplar for the relationship between man and nature.

Haltia also offers day schools and summer camps to local students. A hallmark of Scandinavian education is the concept of friluftsliv (frí-loofts-live). The literal translation is “free air life.” While students and visitors are inside the center, they can experience the magic of Finland’s 39 National Parks across its diverse regions from the archipelago to the Lapland. They are presented across all five seasons—spring, summer, fall, fall-winter, spring-winter. But most importantly, people are encouraged to leave the center and interact with nature. Nothing complicated—just get outside, play, and wonder.

If you are lucky enough to be in Finland, visit this enchanting place to view its special exhibitions or experience Nuuksio by foot, canoe, horse, ski, or snowshoe.  You can borrow camping gear or a nature path backpack which includes a ready-made,  two-hour forest studies program with all of the equipment you need. The material is only available in Finnish, so a mobile device with a translation app will come in handy. ​Keep the story of the Kalevala alive by experiencing and appreciating Finnish nature. And choose your boat wisely. 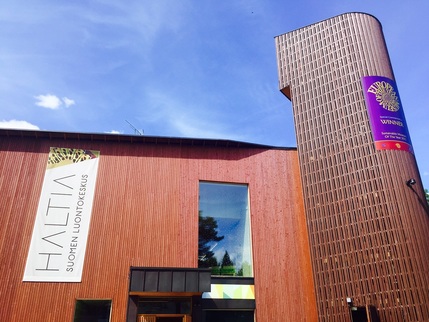